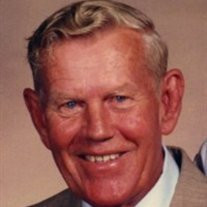 Broughton, Walter Ray Walter Ray Broughton, 79, of Hilliard FL, passed away on August 31, 2013 at his daughter Sandra’s home of complications following a stroke. Visitation will be held at Callahan Funeral Home on September 6th from 6:00 to 8:00 PM. Services will be held at Callahan Funeral Home in the chapel on September 7th at 11:00 and burial will follow the services in Alma, GA at 3:00 PM. Sheri Sober of River of Life Ministries will be officiating. Funeral arrangements are being handled by Callahan Funeral Home. Ray was born in Douglas, GA on September 22, 1933 to Cornelius and Gerlie Broughton. Ray was married to Bonnie Melton on April 17, 1954. They were married for 54 years before divorcing in 2008. Ray worked for Weyerhaeuser Company and retired to his farm in Hilliard after many years of service. He enjoyed fishing, hunting, carpentry, auto and tractor mechanics, horticulture, raising cows (many of which became pets after the grandchildren gave them names), and spending summers and holidays with all his family at the farm. He adored above all on this earth his children, grandchildren and great-grandchildren. If help was ever needed, Ray was always there. Whether helping to build a church, home repairs, a hot meal, or simply listening while “drowning a worm”, you need only ask and he was there. He cared for his brother Albert until his death in 2010. His last selfless act on this earth was to care for his daughter Sandra after she survived bilateral breast cancer. Ray is survived by his daughters Sandra Richmann and Linda Terrell, grandchildren Christopher Richmann, Amy Terrell Pinkston and Joshua Terrell, great-grandchildren Madison, Emma, Trent and Garrit, his former-wife Bonnie and many other family and friends. Ray is preceded in death by his parents Cornelius and Girlie, siblings Juanita, Albert, Sonny and Geneva, and several half-siblings.

Broughton, Walter Ray Walter Ray Broughton, 79, of Hilliard FL, passed away on August 31, 2013 at his daughter Sandra&#8217;s home of complications following a stroke. Visitation will be held at Callahan Funeral Home on September 6th from... View Obituary & Service Information

The family of Walter Ray Broughton created this Life Tributes page to make it easy to share your memories.