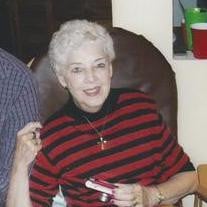 MEZIERE Peggy Hodges Howard Meziere was born September 3, 1938 in Ft. Myers, Fl., the only child of Ralph & Elveda Hodges (dec.) Peggy wore many hats in her lifetime, including graduating at 17 from Andrew Jackson High School class of 1956, working her senior year at Prudential Ins. Company as part of the D.C.T. student program. Peggy married T.G. Howard in 1957 and left for California. As a young Navy Wife, she had 2 wonderful sons from this marriage, Timothy H. Howard and Kenneth G. Howard, while in Ca. She was very active in the Navy Wives Club, and had many fond memories of playing “Bingo” with the other wives to pass away the time while their husbands were on deployment. When this marriage ended in 1965 she met the real true love of her life, an Okie, Matt Meziere, also in the Navy stationed on a destroyer (Ault DD 698) at Mayport Naval Station, had two more great kids Gary A. and Sherry Meziere West. This marriage has lasted for 46 years. Peggy had a rich, full life working as a waitress in MD, printing business, Dept. of Education, secretary, and even as the Town Clerk of Hilliard,Fl. for 1 week. She was the first president of Title I at Hilliard Elementary, which she found very rewarding. Peggy loved the Lord and she was saved at age 12 at Beaver St. Baptist Church. She never doubted whether there was a Heaven or Hell because she knew she was saved by grace and she wanted someday to be reunited with all of her family in Heaven. A resident of both Hilliard and Florahome, Fl. she is currently a member of Oak Avenue Baptist Church in Florahome, close to their retirement residence on Georges Lake. Peggy was also a member of AmVets Club post 86 where she made many longtime friends, and was also a member of the Moose Lodge in Palatka, Fl. She loved her husband and her kids, grandkids, and great-grandkids with all her heart. Peggy is survived by husband Matt, 3 sons Timothy (Sue) Howard, Kenneth Howard, and Gary (Shannon) Meziere, and daughter Sherry Meziere (Richie) West. Her Grandchildren are her beloved granddaughters Tiffy (Dustin) Gardner And Genevieve Howard, her grandsons are Cody West, Chase West, Trevor Meziere, and Adam Howard, great-grandchildren are Malcom Howard and Georgia Aubrey Gardner. According to Peggy’s wishes, her funeral will be held at Callahan Funeral Home Inc. 617365 Brandies Ave. Callahan, Fl. 32011, under the care of Ellis L. McAninch, Jr. L.F.D. Visitation will be held @ 1p.m. on Mon. June 11, 2012 with Funeral Services beginning at 2 p.m., both in the Funeral Home Chapel with Rev. Curtis Harrington officiating. Interment will follow at Bethel Primative Baptist church Cemetery, Hilliard, Fl. and she will be laid to rest near her mom and dad! Condolences may be expressed at www.callahanfh.com. Arrangements by Callahan Funeral home, Inc. Ellis L. McAninch, Jr. L.F.D.

The family of Peggy H. Meziere created this Life Tributes page to make it easy to share your memories.