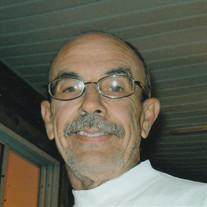 Maurice Richard Higginbotham November 12, 1949 – September 7, 2015 Maurice passed away on Sept. 7, 2015 at his residence with his wife Sheila by his side. He was born on November 12, 1949 in Fernandina Beach, Fl. After graduating from Callahan High School in 1967, Maurice joined the U.S. Navy and served as an Aviation Electrician on board the U.S.S. Forrestal. After completing his service, he enrolled in Jones Business College for computer science. He was employed with Blue Cross & Blue Shield for 15 years in the computer programming department. He then gained employment as a Readjustment Veteran at Kings Bay for the stand up of Trident Refit Facility. He retired in 2008 as Hardware Support Supervisor in the Information Systems Department. Maurice received many citations for professional achievements in superior performance of his duties and was dedicated to serving his fellow employees, military personnel and submariners. He was a successful man in all he did. There just wasn’t much he couldn’t accomplish from constructing a home, carpentry additions, car overhauls, electrical, plumbing, to operating a small pressure washing business part-time. He contracted with the School Board to clean all the School Buses (once was enough!!) It all came so easy for him. His main focus in life was hard work to achieve success in whatever he chose to do. Maurice loved traveling, technology, firing his guns, boating, fishing, and golfing. He served as Deerfield Lakes Golf Association President from January 2010 to June 2012. Maurice was a member of Callahan First Baptist Church and was a loving husband, father, son, brother, uncle and pappy. He is survived by his wife of 31 years Sheila, daughter & son – in – law Heather & Rich O’Connell, son and daughter – in – law Josh & Christina Higginbotham, as well as grandchildren Stephanie (deceased), Alexis, Branden, Kinsley, and Addison. Also surviving are his mother Lavern Meeks, brother and sister – in – law David & Brenda Higginbotham, a niece Amanda, nephewsCaleb, Justin, Mark, Macky, Dusty and Corey, and a great niece Arielle. Maurice also has numerous loving cousins, aunts, uncles, and friends. He was predeceased by his father Aubrey Higginbotham. Visitation will be held in the Chapel of Callahan Funeral Home from 6 to 8 p.m. on Thurs. 09/10/2015 with Funeral Services at 1100a.m. Friday, Sept 11, 2015 in Callahan First Baptist Church with interment in Jones Cemetery, Callahan. Condolences may be expressed at www.callahanfh.com. Arrangements under the direction and Care of Ellis & Charlotte McAninch, Callahan Funeral Home, Inc.

The family of Maurice Richard Higginbotham created this Life Tributes page to make it easy to share your memories.