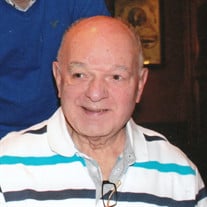 James “Jim” Minich, 84, passed away peacefully on July 9, 2014 at his residence in Fernandina Beach, Florida with his family by his side. Born January 5, 1930 in Oil City, Pa. to William and Florence Baker Minick, Jim graduated in 1947 from Titusville High School. He then enlisted in the Unites States Navy and served his country during the Korean Conflict aboard the minesweeper USS Fitch. He was employed for nearly four decades at Universal Cyclops Specialty Steel in Titusville. After retiring, he enjoyed meeting new people while working at Cross Creek Resort as a golf starter and ranger. Jim was a lifetime member of the VFW Bruce Shorts Post 5958 in Titusville. He was an avid outdoorsman, and his most enjoyable times were spent hunting in the forests of northwestern Pennsylvania, traveling with his wife Nancy to various national parks, wintering with his friends and golfing with his buddies in Floral City, Florida, spending with his grandchildren, and socializing at the “ Saturday Breakfast Club”. Jim is survived by his wife Nancy Morris Minich, along with three children, Sandy Minich Youngblood (Joel), Jim Minich (Penny), and Linda Fletcher (Rick). Also surviving are three grandchildren, Tiffany and Dustin Fletcher, and Ciera Jo Minich, as well as one brother Don, and his wife Cathy, one sister – in – law, Grace, and numerous nieces & nephews. He was preceded in death by his parents and his brother Bill. As per Jim’s wishes, there will be no visitation or formal services. The family greatly appreciated the compassionate home health care Jim received during his illness. Therefore, memorial donations may be made to Community Hospice of N.E. Florida, 4266 Sunbeam Rd., Jacksonville, Fl. 32257. Arrangements are under the care and direction of Ellis and Charlotte McAninch, Callahan Funeral Home Inc., 617365 Brandies Ave., Callahan, Fl. 879-2336. Condolences may be expressed at www.callahanfh.com.

James &#8220;Jim&#8221; Minich, 84, passed away peacefully on July 9, 2014 at his residence in Fernandina Beach, Florida with his family by his side. Born January 5, 1930 in Oil City, Pa. to William and Florence Baker Minick, Jim graduated... View Obituary & Service Information

The family of James "Jim" Minich created this Life Tributes page to make it easy to share your memories.