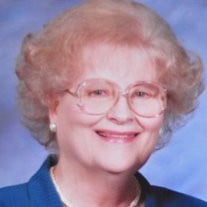 Gloria Elizabeth Andrews Walker started walking with Jesus Friday, January 18, 2013. She ascended from Baptist Medical Center Nassau in Fernandina, FL to enter into His presence after a 2.5 year battle with salivary gland cancer. She tracked most of her journey on her blog: www.aworkwithin.blogspot.com. The final entry will be added at a later date. She was born July 20, 1946 in Vancouver, British Columbia, Canada to Robert Ashton Andrews and Alice Ruby Churchill. She grew up in St. John’s, Newfoundland, Canada until she moved to Florida at the age of 14. She became a US Citizen and married Bona Walker in Jacksonville, FL. Their anniversary is January 31 and it will mark 44 years of marriage. She was a Proverbs 31 woman. It was her passion that the message of Christ be spread. Her desire was to study the Bible and pass that knowledge on to those willing to listen. Not being content to be in the Omnipresence of God (He is everywhere) or the Abiding Presence of God (touching only followers of God), she wanted the Manifest Presence of God. This presence is known as the Immanuel Factor and it is having a distinctive aura of God punctuating and permeating everything about us. (Living in His Presence, The Immanuel Factor by Dave Earley) As of Friday, she is experiencing the Heavenly Presence of God. She is survived by her loving husband, Bona Walker of Callahan, FL; two sons: Jeffrey Walker and his wife, Jennifer, of Callahan and Jeremy Walker of Hilliard, FL; and a daughter, Lori Palmer and her husband, Tony, of Columbus, MS; her parents, Bob and Ruby Andrews of Callahan; two siblings: Linda Stewart and her husband, Dwain, of Callahan, and David Andrews of Black Mountain, NC; 5 grandchildren and numerous nieces and nephews. Memorials can be sent to Gloria’s Outreach at First Baptist Church of Gray Gables, PO Box 629, Callahan FL 32011 Her funeral was on Monday, January 21, 2013 at First Baptist Church of Gray Gables with Callahan Funeral Home entrusted with arrangements. Pastor Andrew Smith and Grace Page officiating worship. Condolences may be expressed at www.callahanfh.com.

The family of Gloria Elizabeth Walker created this Life Tributes page to make it easy to share your memories.