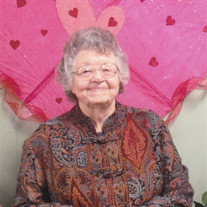 Christine Dorothy Cook, 87, of Jacksonville, Fl., passed away Wednesday August 13, 2014 at Baptist Medical Center after a lengthy illness. As she went home to be with her Lord and Savior she was surrounded by her family and loved ones. Mrs. Cook was born on Friday December 31, 1926 in Jacksonville, Fl., to the late George Washington Bell and Maud Janie Fouraker Bell. Mrs. Cook was a housewife who loved many things. In her spare time she liked to sew, crochet and make ceramics. She was an active and devoted member of Cedar Bay Baptist Church in Jacksonville. She used to love to sing in the choir and volunteer for many church functions and activities. Her biggest love was her husband and family. She was well respected in her community and by her family. Mrs. Cook came from a rather large family of 12. She was 1 of 3 girls and 9 brothers. She will be loved, remembered and greatly missed by all who knew her. Mrs. Cook was preceded in death by her one and only true love, her husband Conroy Edgar Cook, Sr. Had he lived they would have celebrated their 70th wedding anniversary Friday August 1, 2014. She was also predeceased by her son Conroy Edgar Cook, Jr., also known as “Eddie”. She was also preceded in death by her grandson Michael D. Cook and daughter in-law Jeannie Cook as well as 2 sisters and 7 brothers. Mrs. Cook is survived by her daughter Carol Christina Godwin and her husband Cecil of Pensacola, Fl. A sister Marilyn Thomas and her husband Tom of Jacksonville, Fl., 2 brothers Clayton Bell and his wife Jeannetta and Clinton Bell and his wife JoAnn all of Callahan, Fl. 1 grandson Robert Price, Jr. and wife Camille and 3 great grandchildren Kathryn, Lyndsay and Madalyn Price all of Marietta, GA. A visitation and gathering of family and friends to honor the life of Mrs. Cook was held Sunday August 17, 2014 at Callahan Funeral Home. A Church Service was held Monday August 18, 2014 at Cedar Bay Baptist Church with the honorable Rev. Bill Tyler and Rev. Stephen (Biship) Thomas officiating. Interment followed in Bell Cemetery, Callahan, Fl. Arrangements were under the care and direction of Ellis and Charlotte McAninch, Callahan Funeral Home, Inc., 617365 Brandies Ave, Callahan, Fl., 904-879-2336. Condolences may be expressed at www.callahanfh.com.

Christine Dorothy Cook, 87, of Jacksonville, Fl., passed away Wednesday August 13, 2014 at Baptist Medical Center after a lengthy illness. As she went home to be with her Lord and Savior she was surrounded by her family and loved ones. Mrs.... View Obituary & Service Information

The family of Christine Dorothy Cook created this Life Tributes page to make it easy to share your memories.