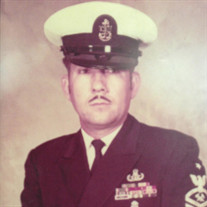 Carroll D. Hayes ( Masterchief U.S. Navy Retired) of Jacksonville, Florida, passed into eternal rest October 22, 2014. Masterchief Hayes is the son of the late Ivey D. and Clara Jones Hayes. Carroll was born October 3, 1934 in Hazelhurst, Georgia. He was preceded in death by his wife Bertha Ellisor Hayes of 56 years, infant daughter CarolAnn Hayes and brother Thomas W. Hayes. He is survived by a son Howard D. Hayes (Karen), daughter Ann Lewis, sister Madrid H. Adams (Rick) four grandchildren and several great-grandchildren, nieces and nephews. Carroll graduated from Jeff Davis County High School in 1951. He enlisted in the United States Marine Corps Reserve in June 1954, and was honorably discharged on October 2, 1956. On October 3, 1956 he enlisted in the United States Navy and was honorably discharged October 3, 1977 as a Masterchief (E-9) Rate HTCM-EOD DV., having earned the highest rank given to an enlisted man and receiving it in record time. He was selected to be a part of the Special Forces (EOD) October 1961. Many compete but few are chosen. Special ops training consist of diving demolition, explosives, Military Munitions and their applications. He completed his training in 1962 and he and his team (Seabees) traveled to 28 countries, islands and principalities during his 21 year career with 3 years served in Viet Nam. Upon returning to the states he was assigned as Chief Recruitor, U.S. Navy Recruiter Station, Dublin, Georgia from 1970-1972. From there he was assigned to Special Operations, Cecil Field Jacksonville, Florida where he served honorably until retirement. Always looking for a challenge, Carroll accepted a position at Florida Community College Jacksonville teaching at the Geis Marine Center for several years earning the respect of the Dean, fellow Teachers and students. A man of many talents he loved to play the piano and sing. He would play anywhere he could find a piano to the delight of all who were around. Carroll shared his love of music with those in nursing homes and rehab centers. Masterchief Hayes, who spent his life criss-crossing the world on land and under the sea was the ultimate outdoorsman. He loved to hunt, fish and was most happy when he was shooting his guns. He entered many competitive shooting competitions. Always striving to do it better each time while amazing his fellow competitors with his skills. He will be missed by his family, friends and his beloved dogs Penny and Button. Masterchief Carroll D. Hayes ephitaph reads: “If a man has nothing for which he is willing to fight then he is an insufferable creature who must be protected by men better than himself.” Carroll was a 32* Mason and a life member of the National Rifle Association. Memorial Services will be held on Saturday, November 8, 2014 @ 11:00a.m. at the Anchor Church of God, 541798 U.S. Hwy 1 S, Callahan, Fl. Condolences may be expressed at www.callahanfh.com. Arrangements under the care and direction of Ellis & Charlotte McAninch, Callahan Funeral Home, Inc. 617365 Brandies Ave. Callahan, Fl.

The family of Carroll D. Hayes created this Life Tributes page to make it easy to share your memories.